If you ever wake up feeling like you’re wearing concrete shoes, then perhaps you should try a delicious Iced Chocolate Coffee Bone Broth Smoothie to power you through your day!

After regularly drinking bone broth for two years, I wanted to create a crave-worthy coffee protein shake that I could enjoy in the summer months.

Before testing this recipe, I honestly didn’t know if the flavor of nutrient-rich chicken bone broth would disappear in this coffee smoothie.

But joys of joys it worked and left me feeling like I had a surge of energy that I hadn’t felt in a long time, albeit without the coffee shakes! 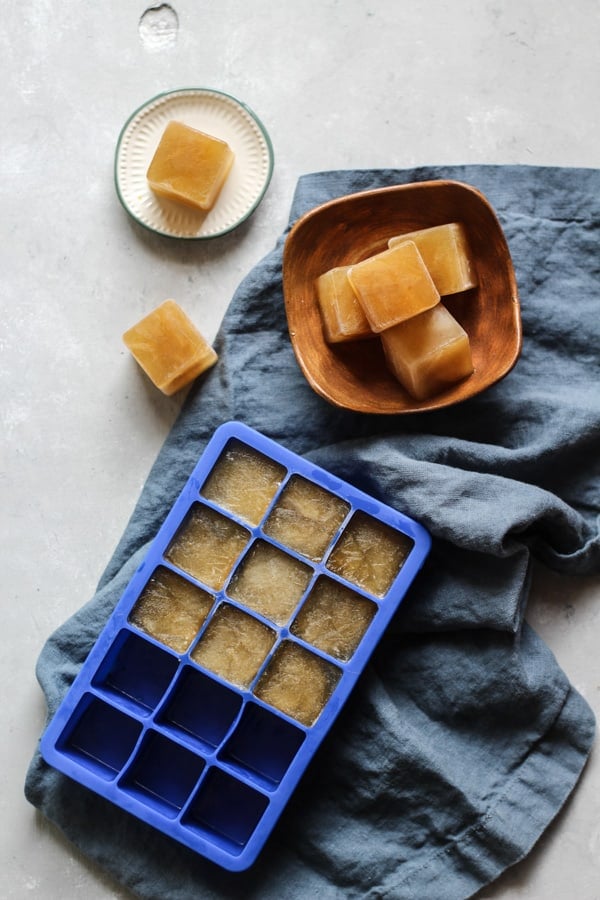 how to make a coffee protein shake or smoothie

The secret to this iced coffee smoothie is in the chicken bone broth ice cubes.  Four ice cubes have about 7-9 grams of protein, and when mixed with coffee, will give you an amazing energy boost in the morning.

You can replace some of the almond milk with yogurt for even more of a protein boost.

And trust me, the ice cubes are flavorless, especially if you use super high-quality chicken bone broth!

where to buy bone broth?

If you want to purchase high-quality organic bone broth with enough collagen, then there are only a couple of brands that are actually worth buying as many of the cartons don’t have as much collagen in them:

how to make your own bone broth

I have 3 LIFE-CHANGING hacks for making bone broth at home that you don’t want to miss out on.  After two years of buying bone broth because it’s such a PAIN to make, I had to find a way to make it easier!

There are a few brands that would work, but one of my favorites is Dr. Axe’s Bone Broth Protein Powder.  I’ve tried both the vanilla and chocolate and I love them both.

If you use this brand of bone broth protein powder, I recommend only using a half of a scoop because it’s quite thick.  And omit the bone broth ice cubes too. 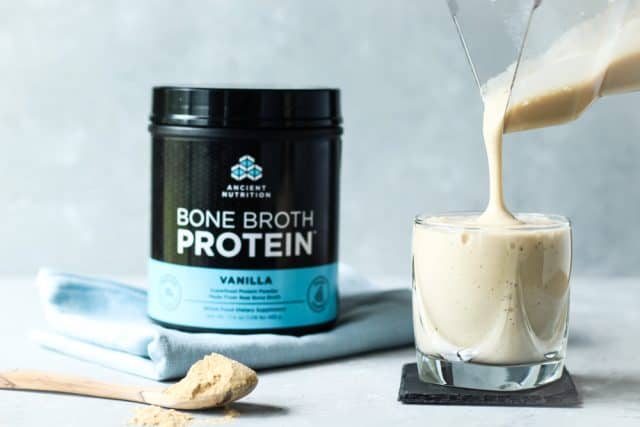 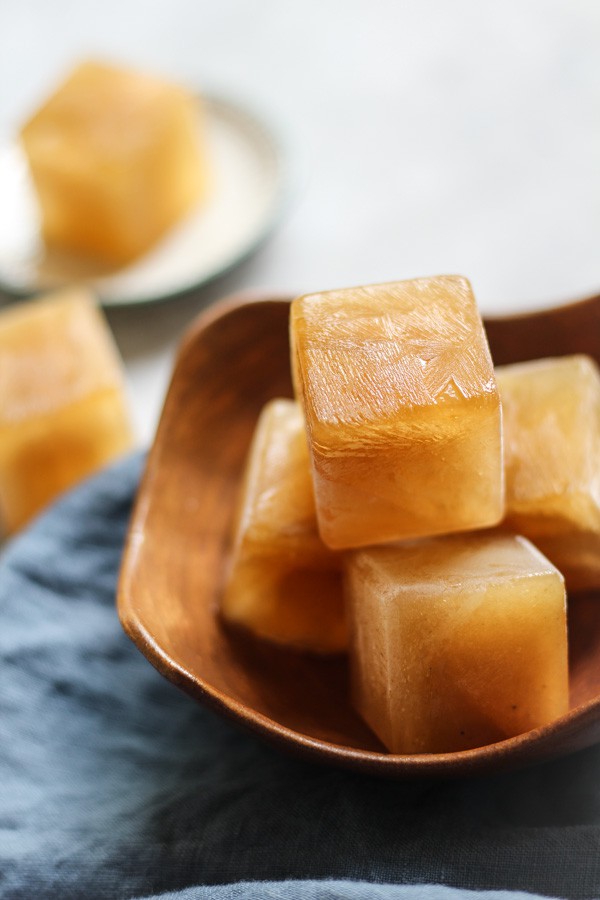 When blended, the bone broth will often get a nice bubbly consistency, making this smoothie look like a cold foam latte! 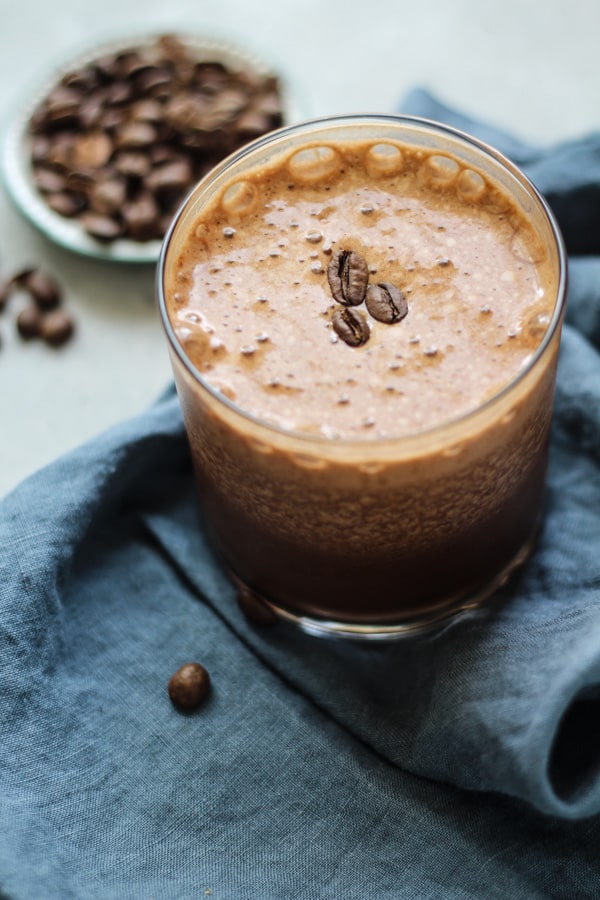 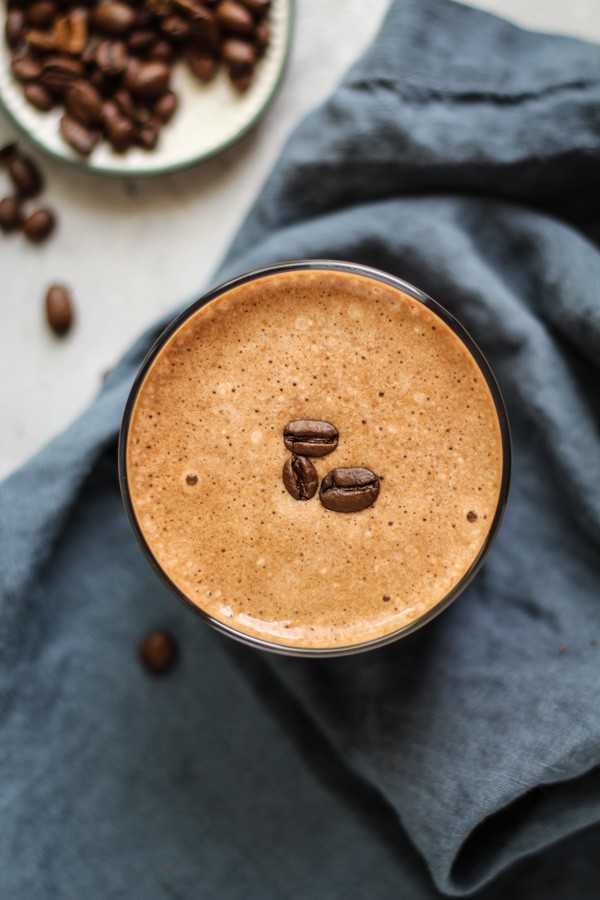 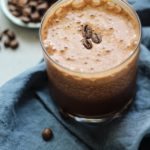 This refreshing beverage blends the benefits of bone broth with a tasty coffee and chocolate morning smoothie!

You can brew coffee any way you normally like to brew it.  Or you can pull two shots of espresso and fill with water the rest of the way to make 1/2 cup of liquid.

Start your day off right with a healthy and EASY QUINOA BREAKFAST BOWL packed with protein, healthy fat and fresh cherry summer tomatoes! 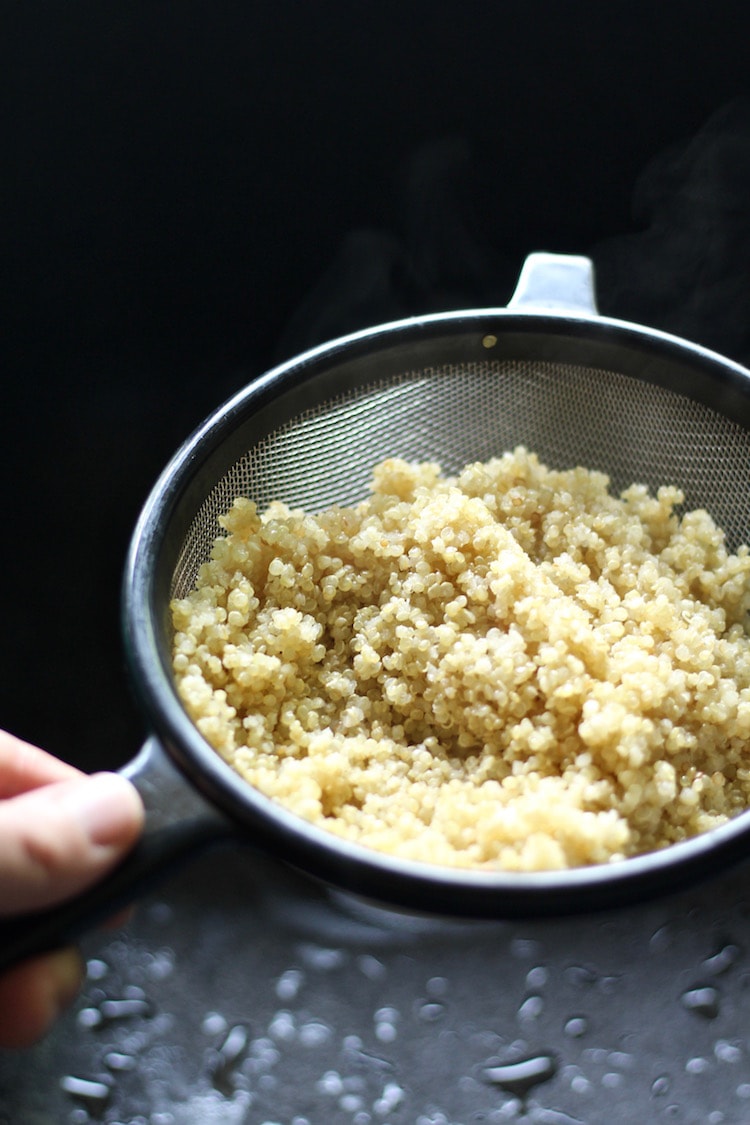 I made this quinoa breakfast bowl for lunch today and took photos on a whim while my son was napping.  Creating a recipe from scratch, planning on how I’m going to shoot the recipe, making and styling the food usually takes hours, but this recipe is so simple, I was able to throw together some tasty items I had on hand, put it together and photograph it in no time, with no pre-planning, YEAH!

This is a wonderful breakfast for the weekend or a day off.  To make things even easier, slice the tomatoes and olives, and toss them with the mozzarella balls the night before.  Top with balsamic vinegar, olive oil, and fresh basil just before serving.  The next morning fry up an egg, slice the avocado and your superhero breakfast is DONE!

A note about quinoa and grains in general

If you are a super savvy, in-the-know foodie, you might already have an understanding about phytic acid in grains.  If you have no idea what I’m talking about then listen up.

The outer portion of whole grains contains phytic acid which is a compound that blocks your digestive system from being able to absorb nutrients like magnesium, calcium, iron, and zinc.  These nutrients are the very thing that is located in the outer portion of the grain!  It’s a complete conundrum.

So how on earth can your body access these nutrients?  It’s actually quite simple.  Many ancient cultures have intuitively understood for centuries the benefits of soaking grains to aid digestion.  For quinoa and other whole grains, you can simply soak them in warm water with a little bit of vinegar for at least a few hours or overnight.  The soaking action helps to neutralize phytic acid and create enzymes known as phytates, which make it possible to absorb the powerful nutrients in whole grains, especially quinoa.

For more information about the many problems with grains and modern-day bread, subscribe to my blog and receive a FREE guide for 5 Reasons modern-day bread is making you sick…and what you can do about it.  There is a form at the end of this post! 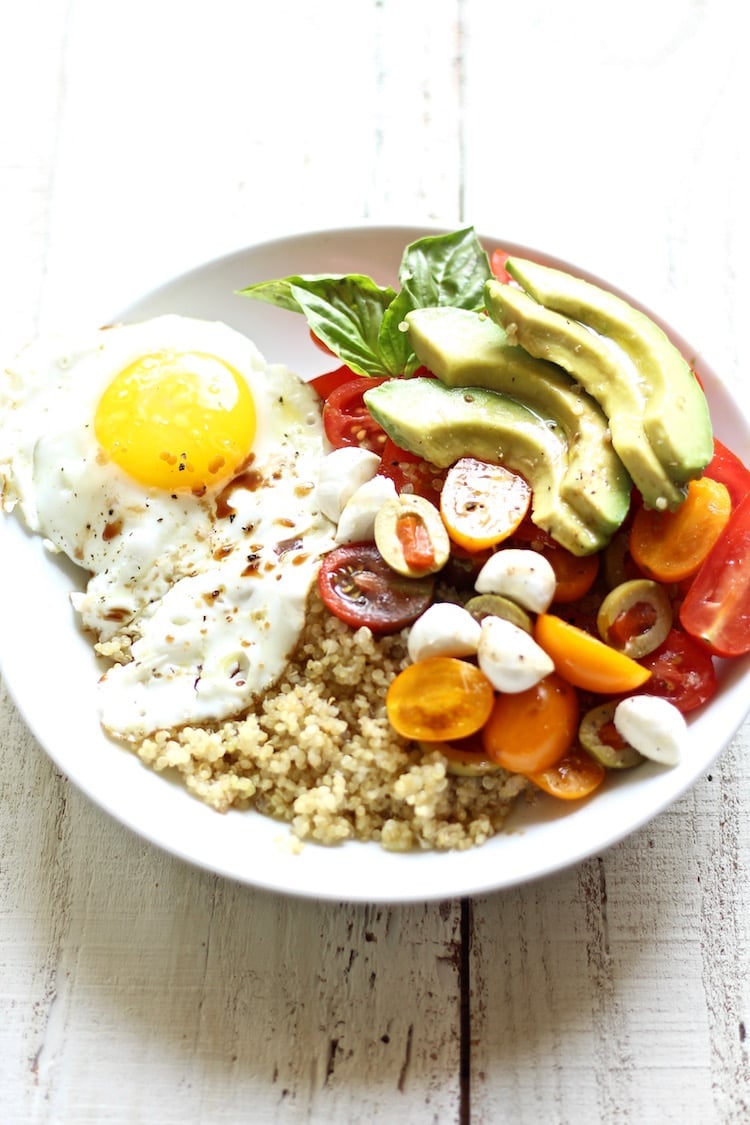 If you want to speed up the process, cook the quinoa the night before and just reheat it quickly while you slice the tomatoes and avocado and cook the crispy egg.  I find one egg per serving is perfect because the quinoa is nice and filling.  I drizzled a touch of olive oil and balsamic over the dish at the end, and MWAH! 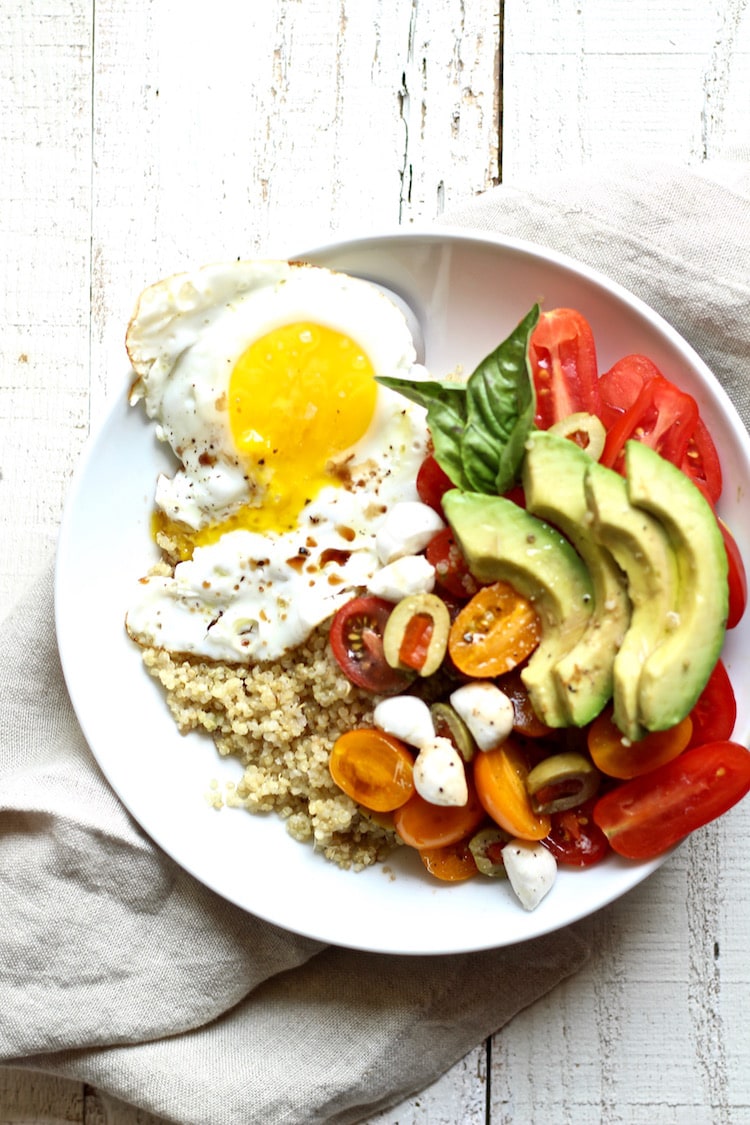 Release your inner superhero with this amazingly delicious breakfast, lunch, or dinner bowl! 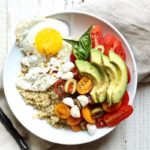 To neutralize the phytic acid in the quinoa, simply soak the grains in warm water with a touch of vinegar for several hours or overnight in a mason jar.  You can do this the night before you make this for breakfast, or you can even soak it, then cook a larger portion of quinoa for the week, refrigerate, then just reheat it when you are ready to cook. 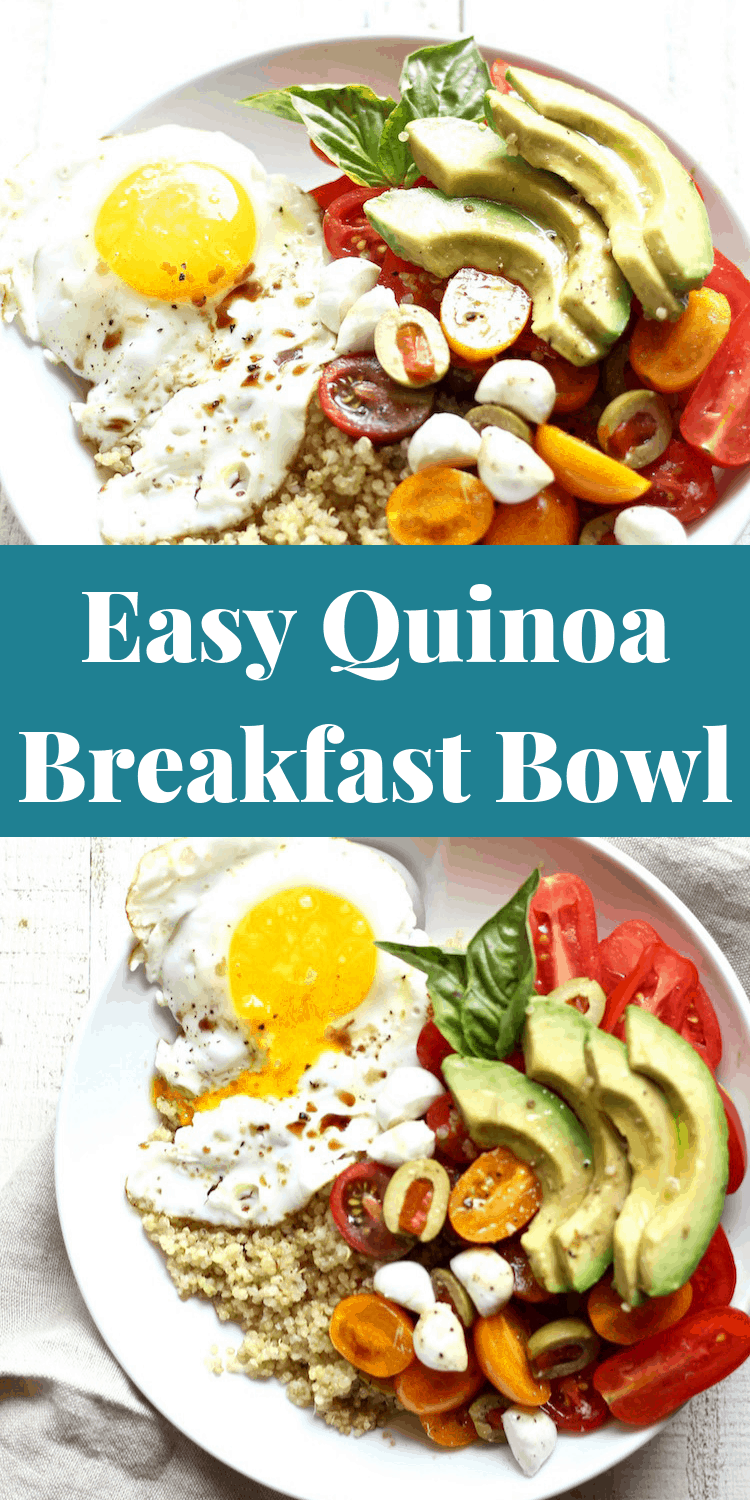 Cast iron, ooooohhh sweet cast iron.  You are so fair.  You make crispy potatoes like nobody’s business, which just so happens to be the perfect base for BACON, soft and tender eggs, green chiles, cheddar cheese, and buttery avocados. Yes folks, it’s a cheesy green chile crispy potato breakfast skillet!

You know how you get those extra-crispy-on-the-outside, tender-in-the-center breakfast potatoes at restaurants that seem to be impossible to replicate at home?  Well, I’ve fixed that problem for you with an easy and foolproof way to get the crispiest breakfast potatoes ever!  So what’s the secret?  Well there are a few ways to ensure extra crispy texture.

Step 1: First, you MUST par-boil the potatoes to start the cooking process.  Boiling the pre-cut potatoes first helps them to tenderize in the center, so that they aren’t crispy on the outside, yet undercooked in the center.

Step 2:  Cooking them in small batches in a cast iron skillet ensures that every piece of potato gets caramelized (the no-potato-left-behind technique).

Step 3: In this breakfast skillet, they get one more chance to get even crispier when you add the cheddar cheese and eggs on top.  Simmering the eggs on the potatoes with the cheese helps to fuse all those tasty bits together, thereby creating a crust around the entire bottom of the potatoes??!

Cut the potatoes into equally-sized chunks and simmer for 5-6 minutes.  Drain them really well.  While the potatoes are cooking, heat the cast iron skillet over medium heat.  Cook the bacon (I cut them in smaller pieces) and reserve the bacon fat.  Yes, you heard me right!  Don’t use all of the fat at once, because you will do a couple of batches of potatoes, and you don’t want the first batch to absorb all of the fat.  Of course, you could use olive oil for a lighter version, I won’t be mad at ya.

Keep the skillet over medium heat for the potatoes.  It’s better to cook them on moderate heat for a few more minutes, than to cook them on higher heat and risk burning the skin. Now that would be a travesty!  Have a sheet pan lined with paper towels for the bacon and potatoes for easy workflow.

Once all the potatoes are cooked, add them back to the pan, add half of the cheddar cheese and crack four eggs on top.  Sprinkle the other half of the cheese IN BETWEEN the eggs.  Add the green chiles and cover with a lid and simmer for 5-7 minutes on medium heat, or until the eggs are done to your liking.  I like mine a bit runny because it adds a luscious sauce to the skillet when you bite into it?!

To serve, top with the bacon bits, sliced avocado, lime, and sour cream! 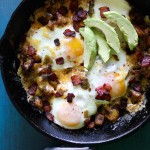