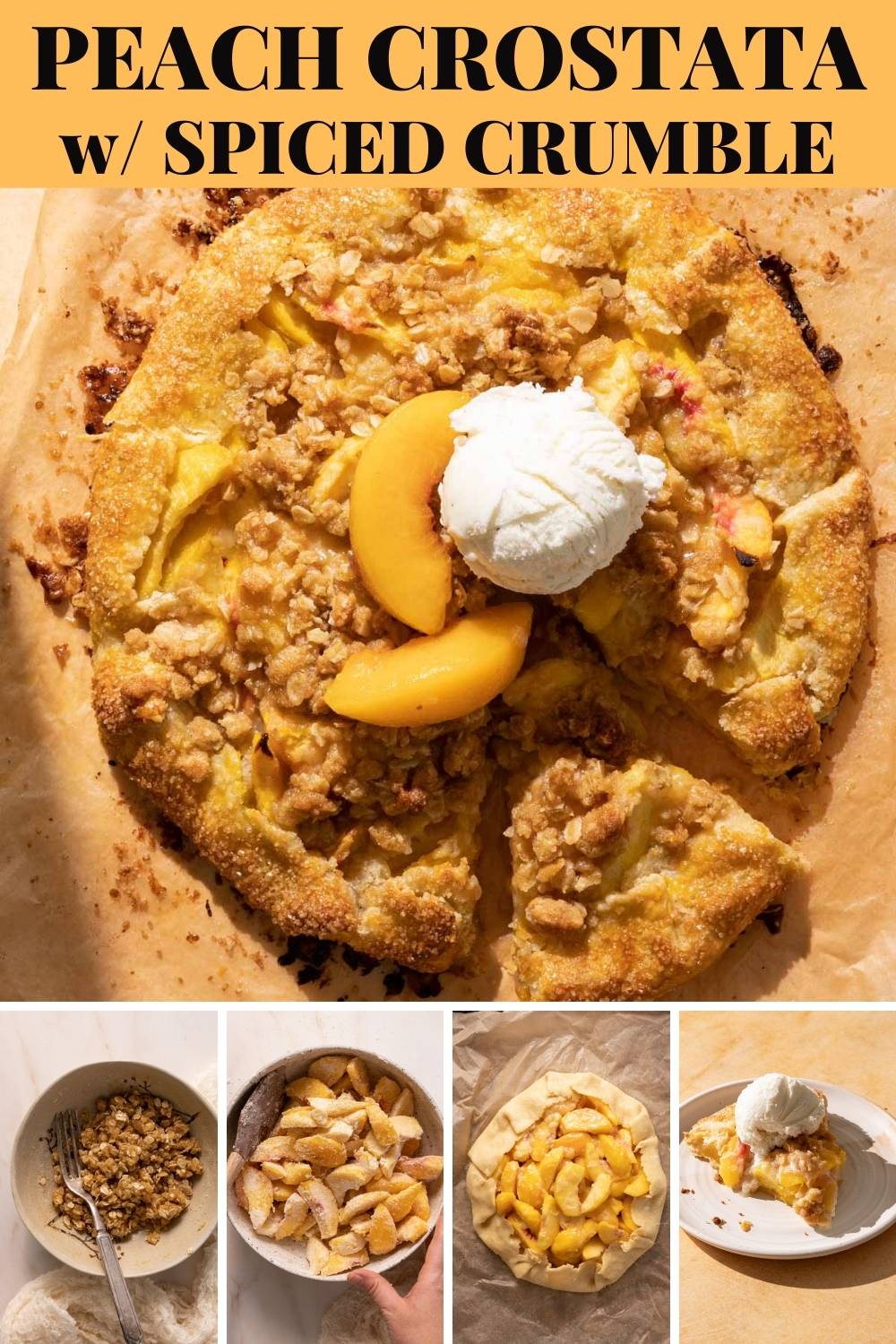 A peach crostata is the most forgiving way to bake a peach pie because the rustic free-form style makes SO it easy to shape! This recipe is a cross between a peach crisp and a peach pie which lends a flaky crust with the sweet crumble on top…so so good.

Forget all about baking a perfect-looking pie with 75 pie crust rose petals on top that will inevitably slow you down and ruin your pie crust.  Instead, opt for a foolproof way to shape your peach pie!

pie crust recipe for a crostata

Any pie worth its salt needs the Perfect Pie Crust.  Making a pie crust from scratch can feel a little daunting at first, but I’ll take you step-by-step through the process so you can create a flaky and tender crust every time.

You can use a food processor or make it by hand using a pastry cutter.

I find the easiest way to shape the crust without it falling apart is to roll out my chilled pie crust between two layers of parchment paper, then pop it back in the fridge while the peach filling is being prepared so that the crust is nice and cold before it bakes.

Below you can see how the crust stays together between that parchment paper.

Or you can totally purchase a pre-made unbaked crust in the freezer section.

Should I use fresh or frozen peaches?

Believe it or not if you use fresh peaches, I find the texture is much better if the peaches aren’t fully ripe. If they are softened and ripe, they tend to fall apart while you’re slicing them (which is really frustrating) and they can even turn to mush once you bake them.

If the peaches are still a bit firm they hold their shape while slicing and they retain a nice texture in the pie once baked. The sugar in the filling and in the crumble topping will sweeten them nicely.

Frozen peaches will work great in this recipe too because they are already peeled and sliced and won’t turn to mush while baking.

Can I use a store-bought pie crust?

Just make sure when you add the peach filling, you leave some room around the rim to fold the edges toward the center.

For the peach filling

Add to the peaches a few simple ingredients: flour, sugar, salt, and fresh or ground ginger.

Filling and shaping the crostata

Take your rolled pie crust out of the fridge and place on a sheet pan.

Pile the peaches up so that you have a two-inch space all around the rim.

Fold the dough toward the center.  If you get any tears in the dough, just wet your fingers a bit and patch them up.  Beat one egg or use an egg yolk, and give the edges a nice egg wash to help them brown.

Bake the crostata directly on a sheet pan at 350 degrees for 38-45 minutes or until the crust is golden brown.  The time varies based on if you use fresh or frozen peaches.  Let cool for at least 20 minutes before serving.  This will help to keep the crust intact when cutting slices.  I like to serve this with a dollop of unsweetened whipped cream drizzled with a touch of honey, or for something sweeter, a scoop of vanilla ice cream. 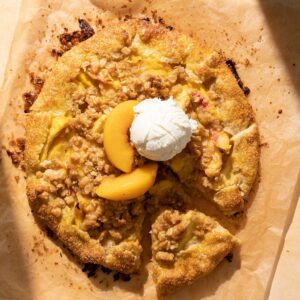 For the Pie Crust

For the Pie Crust

For the Peach Filling

This pie crust recipe is perfect for this peach crostata because it’s flaky, buttery, and so easy to roll out!
Tried this Recipe? Tag me Today!Mention @Bessie.Bakes or tag #BessieBakes!
Share76
Pin181
Tweet
Email
257Shares